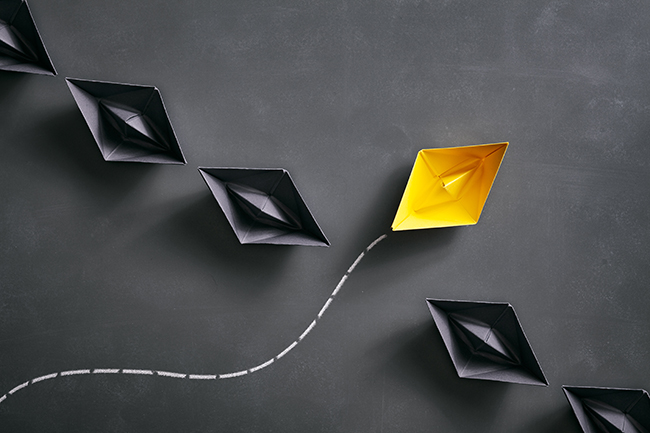 Setting up a new internal audit structure and taking the control environment to a new level in the highly regulated financial services sector is tough. Preparing for listing on the London and Johannesburg Stock Exchanges is tough. Separating part of a business from its parent organisation and preparing for it to go alone is tough. Doing all this with a large team of internal auditors who are highly motivated, with a well-established leader, would make the task marginally less daunting. Unfortunately, when Matt Burton was brought in to lead the internal audit function of Old Mutual Plc’s wealth management business in 2016, he quickly realised the scale of the task at hand.

“I looked around the table and thought ‘Wow! We’ve got a lot of work to do’,” he comments.

Despite these challenges, Burton and his team were the first department in the firm’s wealth management business to be fully prepared for life as a stand-alone listed organisation. By the time the company listed in June 2018, they had emerged as a skilled, trusted group of specialists who were consulted, listened to and supported by the senior management – they had developed a reputation for being brave and honest and for genuinely supporting the board and the executive team across Quilter. It was this transformation that won them the Audit & Risk Outstanding Team – Financial Services Award last year.

Burton’s first move was to develop the relationship with the board and the executive and to gain their confidence in the function. At the same time, he was identifying the expertise he needed to bring into the team. He had got to know Old Mutual when he was a partner at PwC, which had been supporting the team, and he continued to draw on PwC’s support while he developed an internal team with the expertise he needed for the future. Within six months of joining, he was given a place on the firm’s executive committee.

“Having internal audit represented as a member of the executive committee is not common, and some would no doubt say that it presents a conflict of interest, but it gave me the opportunity to champion the work of my team and positively impact the control environment in a much more direct way. I do not believe we would have got the firm to where it is today if this had not happened at that time,” he says.

The separation of the wealth management division and the creation of Quilter as a listed entity was a massive opportunity to transform a relatively overlooked audit function in a large business into a focused, purpose-built team supporting the new organisation. Burton looked for people with a wide variety of backgrounds – finance, risk management, IT, regulations, change management, strategy and first-line customer experience – and even employed an ethical hacker. The new recruits then gained the necessary internal audit knowledge, skills and methodology through training and shared experiences.

By the end of 2017 internal audit had gone from being the team with the lowest engagement scores across Old Mutual to the most engaged area in the firm. Almost half of the team of 28 people had been in their jobs for less than 18 months, but they enjoyed the full support of senior management and of the audit committee and, even more importantly, had confidence that their opinions were respected and being acted upon.

Proof of this came as part of internal audit’s work on a huge IT project. “Management knew it was failing, but we could get down to the root causes to see why it was failing. We realised that we could not give the board the confidence they needed that the project would ultimately achieve what the organisation expected,” Burton explains. “We presented several strong messages backed with evidence and perspective, and ultimately the project was terminated.”

He adds that this decision was a brave one. “I’m full of admiration for the board and our CEO for making such a difficult decision. We want to be known as the UK’s leading wealth manager and this was absolutely the right decision for our customers.” The decision has paid off. Burton says that the replacement project is making good progress, with the build nearly complete and the system undergoing live customer testing as part of a soft launch.

The close relationship with management goes both ways. The CEO recently attended one of internal audit’s team meetings and talked about what he wanted and expected from the function. He also discussed what he saw as his main concerns and fears and how he needed internal audit by his side in these areas.

“He knows that we’ve got his back and he knows most of the team by name,” Burton says. “In the past, internal audit felt that it sat in the shadows and auditors were frustrated because they were writing reports that had limited impact or purpose. What we’ve done is to pull them out of the shadows and allowed them to be heard. It’s amazing how much the organisation has listened to them and responded to their advice.”

As a result, Burton says that he is confident that his relatively small team exerts more influence than many far larger audit teams he has experienced in the past at leading global financial services organisations.

To build up this reputation and influence, the team employed innovative techniques as well as its wide range of specialist experience. Good customer outcomes are vital to Quilter’s business, so the internal audit team worked directly with current and potential customers through a combination of recorded interviews, feedback sessions with groups and mystery shopping using genuine prospects. This proved a powerful form of assurance and created fresh insights into the business. Some of the mystery shoppers went on to become customers of the firm, so the investment paid off in more than one way.

Breaking up is hard to do

The actual split from Old Mutual was a significant undertaking for the audit team. They needed to create new support structures and develop expertise in areas where they previously relied on other functions within Old Mutual (such as its audit IT platform). Building a new corporate governance infrastructure for a separate public company meant creating a new audit charter, audit methodology, dedicated audit plan and quarterly/annual audit opinions. A new board and audit committee also meant that they needed to build strong relationships quickly.

To help ensure they were going about the transformation in the right way and didn’t miss anything, the team went through two external quality assessments in successive years – the first to confirm that their plan was adequate and the second to check that it had been executed well. The second was particularly positive and confirmed that they had successfully delivered the transformation. This also helped to reaffirm stakeholders’ strong perceptions of the team, Burton says.

He adds that, in addition to implementing the essential governance elements, the team has also introduced new and improved audit practices, including data analytics capabilities and a “management awareness and approach” rating, which assesses how well managers understand, and are focused on improving, the control aspects of their business or function.

“If I had to do all this again, or was advising someone else who was about to do it, I would say pick one or two areas of risk where you want to be known for making a difference in your first year and go all out to deliver in these areas,” Burton says. “This helps to build credibility for you and the team. Then look to extend this to other areas over time.”

Winning the Audit & Risk Award has been a huge boost for the team – even writing the nomination felt like a milestone, according to Burton and Phil Nicholls, acting head of GIA operations, who was responsible for putting the nomination together.

“We don’t usually spend time sitting back and looking at what we’ve achieved, but when we thought about it, it made
us realise we’ve done a lot and we’re really proud of it,” Nicholls says. “When we asked the CEO and the chair of the audit committee for their feedback, they were enormously supportive, which was so gratifying.”

“The award came at a great time for us,” Burton adds. “We don’t take it lightly and we’re not going to rest on our laurels, but we can now build on what we’ve done with real confidence.”

Winning the award also generated significant publicity and praise for the team from across the firm. Burton recalls the wave of WhatsApp messages from the senior executives, board members and the rest of the audit team when the awards were announced. “It was the perfect end to a landmark year for us and for Quilter,” he says.

More importantly, he adds that it also supported the decisions team members made to join Quilter internal audit. “There was uncertainty for those joining this team – we didn’t know whether it would be successful – but we were excited by the prospect of being part of something genuinely new,” he says. “Some planned listings never happen, and so 2018 confirmed to all of us that we’d made the right decision and we were now part of a great team.”

The CEO mentioned the team’s award in his year-end message to the company, and the audit committee chair referred to it in his annual report. News about the award was also posted on the internal company website and written about in the staff magazine. “It’s really helped to put us on the map and, as a result, there’s been a lot of interest in joining our team,” Burton says.

This article was published in July 2019.