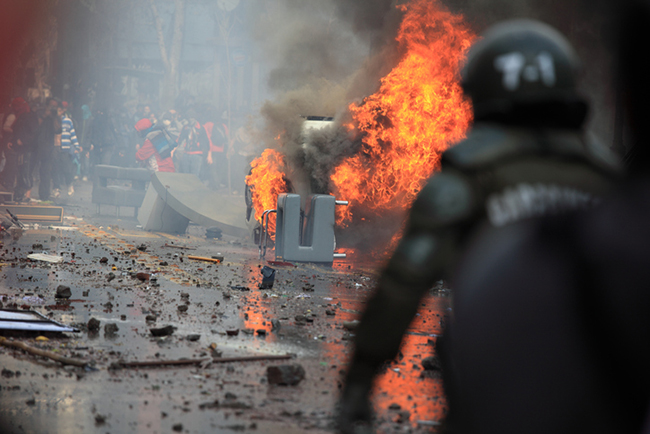 It’s not been a good year for Chinese tech giant Huawei. The US fired its first salvo last winter when it asked Canada to arrest the company’s chief financial officer Meng Wanzhou on spying charges. By mid-May this year the UK government was embroiled in a row about whether to allow the firm to be involved in developing the next generation of communications networks. Meanwhile, customers were starting to avoid Huawei’s products on hearing that Google would no longer allow them to update some Android products, citing US sanctions. The impacts are clear for Huawei, but many other firms were left asking what repercussions the spat could have on their contracts, markets, customers and business decisions? How would China retaliate? What other businesses could be caught in the crossfire?

This is just one example of the questions that are thrown up if even a small part of your business is caught up in a revolution or exposed to economic crises, coup d’etats, interstate trade disputes, economic sanctions or diplomatic rows. Such risks ebb and flow with the diplomatic tide, however as businesses become ever more dependent on international markets and extended supply chains, so they are more exposed to political risks. There is also evidence that many parts of the world are currently in a particularly risky phase.

Risk-management specialist Marsh, for example, highlighted a period of “unprecedented uncertainty” in its “Political Risk Map 2019”. It cited rising geopolitical tensions (namely, Russia against the rest of the world) and protectionist sentiments (namely, the US against the rest of the world). Business confidence generally depends on certainty and there seems to be precious little of that about at present.

Another big change is that, although companies with multinational operations or overseas supply chains have always had to review their exposure to political risks, most UK-focused businesses have added the topic to their risk registers only in the past few years. “Up until the election of Donald Trump in the US and the vote for Brexit in the UK, political risk was always something that companies in other countries had to think about,” says Michael Moore, currently a senior adviser at professional services firm PwC, but formerly a Liberal Democrat MP and the Secretary of State for Scotland who helped prepare for the 2014 Scottish independence referendum. “It never even registered that UK companies would need to consider their home country as being politically risky.”

Worse still, he says, companies have been slow to react. Although Brexit has been a major political and corporate issue for the past three years, Moore believes that most UK companies have still not made any significant preparations for the country leaving the EU. “I suggest that most organisations have still done very little to prepare for Brexit, despite knowing that the worst-case scenario of a ‘no deal’ option is very much on the table,” he says. “It appears that businesses want more certainty about what the outcome is going to be – which rather flies in the face of planning for political risk.”

Brexit is, of course, just one of many political risks on the global map. Whether you are exposed to the fall-out from a US trade war with China or increased sanctions on Iran or North Korea, or whether you are more worried about political instability in Venezuela, Russia’s intentions in Ukraine, Chinese military strength in the South China Sea, war in the Yemen or the ever-present threat of terrorism worldwide, none of the current global political risks is likely to disappear soon, so organisations need to know they can react rapidly to changing circumstances. Internal auditors should be able to provide assurance on this and should therefore feature political risks in their audit plans.

Ian Stone, CEO and founder of business advisory company Vuealta, says that he expects political uncertainty to remain one of the biggest challenges facing decision-makers for the next five years. He warns against trying to “predict the future”. Instead, he advises them to focus on being “fluid”.

“Organisations should be prepared for every scenario – worst, best and everything in between,” says Stone. “Successful businesses can then choose their course based on the information they have and use the latest technology to test ‘what-if’ scenarios against those plans to cover all bases.”

He adds that it is possible to react quickly to changing circumstances only if all the parts of the business think the same way and are aware of what they need to do in any given situation. “Planning can be vital in responding to an unpredictable political situation,” he says. “No matter how big the organisation, if all departments – from sales and finance to marketing and the supply chain – are not connected, they will never keep pace with rapidly changing and volatile international markets. When one area of the business changes, the effects ripple across the whole company.”

Business continuity is an obvious priority for those already accustomed to operating in a volatile political environment and internal audit should review continuity plans regularly. Tom Tahany, an intelligence analyst at security firm Blackstone Consultancy says it is vital to ensure that all the threats and risks that could interrupt the business’s output are identified and that plans are up to date and effective. “You may need to prioritise the resilience of key functions so that these can continue, while business areas that are less immediately crucial are brought back online when possible,” he says.

However, companies without a direct presence overseas, but which have sub-contractors or suppliers abroad, also need to understand how their supply chains and customers could be affected by events outside their control. It’s generally wise not to rely too heavily on a small group of suppliers and to ensure they are not all in the same political region or subject to the same political forces. It’s also important to keep monitoring changing circumstances and to think broadly about how political developments in one place could cause a ripple affect elsewhere.

“You cannot prepare for every possible eventuality and plan a response for every minutiae in a crisis. In some ways this is a good thing. It allows companies a degree of flexibility in planning responses,” Tahany says. “However, you may need evacuation plans of varying magnitudes and secondary and tertiary options to help staff in different countries in the event of a crisis. It is important that companies are prepared for anything, rather than everything.”

A pinch of salt

A key problem with political risk is that it can be difficult to get reliable, timely and accurate information, especially if events unfold quickly – for example, in a coup d’etat, revolution, riot, civil unrest or an invasion. Another problem is how to quantify the impacts of these risks and assess what contingencies need to be taken and when.

If asked to provide assurance about operations in another country or region, internal auditors may find it helpful to talk to employees based there and can also look at risk indicators provided by global governance NGOs, such as Freedom House, Transparency International, the World Bank and the International Monetary Fund (IMF), whose opinions may provide a base layer for measuring risk.

However, Pornprom Karnchanachari, a partner at Thailand-based law firm Legal Advisory Council, a member firm of the Globalaw legal network, warns that some “on the ground” views can be skewed by poor reporting, inaccurate commentary and information sources that cannot easily be challenged or verified – for example, social media, which he says, “should be taken with a pinch of salt”.

When Thailand experienced a coup in 2014, social media and news coverage helped to spread widespread misconceptions of the political situation, making the situation seem extremely risky. However, the on-the-ground situation was quite different, he says: foreign companies were not affected by the political changes, and business continued as usual under the existing legislation while political stability was restored.

More reliable sources of information include embassies which “can offer a basic, but generic, overview”, and Chambers of Commerce (local and foreign). But the best source, he says, is to speak to foreign companies that have been on the ground for some time, as they will have a government affairs team that can share useful insights.

“It is only by arming the business with various viewpoints and understanding the history, culture and unique situation in each country that a business can build a robust understanding and approach to political risk exposure,” Karnchanachari says.

However, sometimes you need to act swiftly. Ben Abbouddi, global threat analyst at travel and healthcare risk management firm Healix International, believes that companies should always consider the worst-case scenario. A risk matrix that places the likelihood of a risk against its impact can help to highlight the most significant risks and those that would require the most time and resources to manage. It may also help to eliminate political “red herrings” that attract media attention, but do not have a significant impact.

Internal audit can play a significant part in evaluating the level of risk and can offer an impartial objective view if there are clashes of opinion. For instance, project managers working in some regions may find themselves at odds with risk managers in head office. Their perception of local risk may be very different and their incentives could make them anxious to pursue contracts or business that, correctly or incorrectly, are seen to be high risk.

Jack Darbyshire manager at strategic risk management planning firm De-Risk says that internal audit teams can assess whether risk managers are being too cautious about particular regions. “Uncertain times can make risk managers focus on risks that will probably never happen,” he says. “Risk management is a negative concept and many traditional risk management teams think so negatively that they end up worrying about extremely unlikely scenarios. This may make project managers reluctant to share communication in the team.”

This is another reason why accurate, timely and trustworthy information is vital. Organisations could lose far more than they gain by failing to do profitable business, or by implementing emergency plans unnecessarily and removing staff or closing operations, only to find that the crisis blows over. Internal auditors should assess the quality and quantity of information available to management who would have to make such difficult decisions. Auditors could also consider whether there are other sources of assurance available.

And a political crisis may also throw up opportunities. Paul McIntosh, CEO of Bridgehead Agency, points out that it is equally important that organisations consider potential advantages associated with the volatility. “Companies need to look for the advantages that a change in political circumstances might afford, and not just think about the risks,” he says.

Brexit is a case in point. “No matter what kind of deal – if any – the UK gets, the EU and the UK are likely to remain major markets and companies want to continue to do business in both,” McIntosh says. “If there is more paperwork in the future, it will add to costs, but this is usually not as difficult or as expensive as some make out. Whichever way you look at it, Brexit will create opportunities – possibly not as many as staying in the Single Market – but companies need to explore these and exploit them.”