Application of the Three Lines Model

This guidance helps internal auditors in the UK and Ireland apply the updated Three Lines Model (previously known as the Three Lines of Defence) published on 20 July 2020 by IIA Global.

Since its adoption in 2013 the original Three Lines of Defence Model (3LOD) has been an influential and invaluable tool for governing bodies and the internal audit profession. In that time, risk management has and continued to evolve within organisations; refinement of the model reflects this evolution and aims to foster closer collaboration between business functions including internal audit. It is not a radical change, more of a subtle shift of language to enhance clarity and purpose. 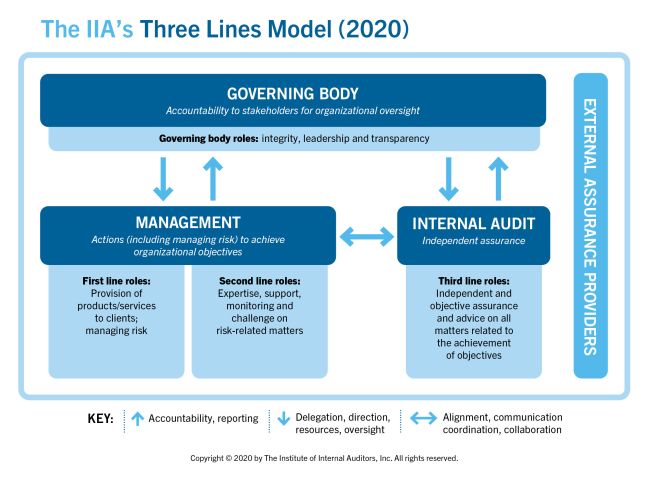 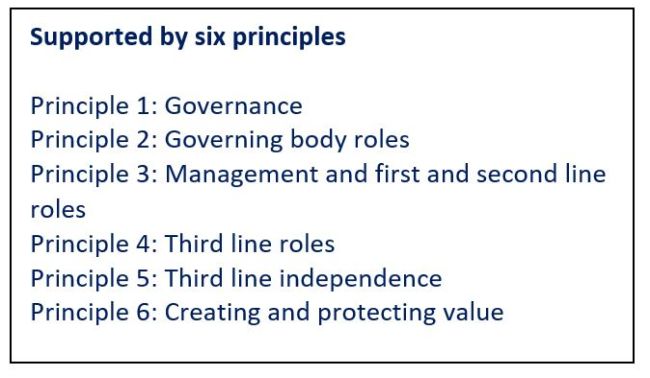 The model clearly sets out the expectations of different groups within the organisation.

Accountability – the governing body; typically, the board and its sub-committees ie audit committee is accountable to stakeholders for oversight.

Assurance – internal audit; independent function reporting directly to the highest point of authority in the organisation - the governing body (audit committee) – providing advice, insight, and continuous improvement, but at the same time supporting management in their role.

The purpose of the three lines is to create and protect value.

No longer use the word ‘defence’ as some perceive this as controlling and avoiding risk.

The changes and their impact

The model adopts the principles-based approach found in many other key governance documents; there are also three key changes to note:

The roles and responsibilities are very much real world; in reality in some sectors the two lines may be blended to support the governance model within the organisation, which is a practical improvement for many internal auditors working in large organisations, because both lines are required to help management achieve organisational objectives through delivery, support and challenge.

At the same time recognising that in some organisations the first- and second-line roles will be separate, ensuring the model also retains relevance to financial services where delineation between the first and second line is of regulatory importance.

Internal auditors will find the use of a principle-based model makes it easier to communicate the purpose and requirements of the model to stakeholders. It supports the language and content of the Supplemental guidance - Core Principles for Internal Audit which defines the internal audit mission. The principles focus on the role of the governing body, management, and internal audit.

A refinement in terminology, is the sole use of ‘governing body’ as the point of accountability. This is terminology that sits well with the desire for chief audit executives to partner with governance leaders.

Internal audit also benefits from the removal of ‘senior management’ as a box below the governing body. This presented a degree of ambiguity in respect of reporting lines and accountability which has been clarified. The role of executive management is clearly in the first and second lines and a recipient and stakeholder in the assurance and insight provided by internal audit.

Working within the model

The Model presents no change to the role of internal auditors although it does add weight to its remit being more strategic and operational rather than tactical.

An effective internal audit function will:

An effective risk management framework will be embedded into the culture and day to day operations of an organisation. This can be achieved by including responsibility for risk management in job profiles, developing performance metrics related to surprise events or loss, and effective risk reporting processes etc.

The Model is a useful tool when providing assurance over risk management, it is presented in a language that is often familiar to governing bodies. Internal audit should be able to observe the application of the Model and evidence that it is management’s responsibility not that of oversight functions or internal audit, to manage risk.

The Model puts great emphasis on alignment, collaboration, and coordination. Internal audit has the skills, competency, and corporate knowledge to deliver insight to help the governing body establish a risk management and assurance framework appropriate for it to discharge its duties in line with its risk appetite. This short piece of guidance and examples may be of use.

Although the narrative for the third line role specifically relates to internal audit, the Model recognises that in some organisations, third line roles other than internal audit may exist, such as oversight, inspection, investigation, evaluation, and remediation. In such circumstances, internal audit should provide assurance that they are truly independent of management so as not to compromise the integrity of the Model.