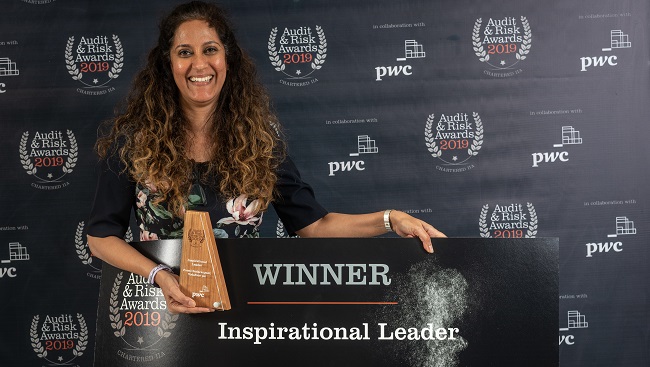 “Everyone deserves a chance,” says Preeti Sadarangani. The head of group internal audit for corporate and commercial functions at Vodafone is practising what she preaches – 75 per cent of her team has been promoted internally in the past couple of years.

To her, this makes perfect sense. “If I’m looking for a senior manager for my team, why should I look outside it unless I need specific skills that we do not have internally?” she asks. “If someone already in the team is ready for this opportunity and has the necessary skills and potential to do the role, I’d rather put my faith in them than in someone I know through a 90-minute interview. I need people who know how our business and our markets work, and I hold on to the best people, so it is a win-win situation.”

Sadarangani is passionate about the advancement of individuals and the competency of the team. She has also done much to support diversity and inclusion in the company (her team includes people from 10+ countries) and has become a company coaching champion. Outside work, she’s involved with the Chartered IIA’s Women in Internal Audit network and was the chair of the committee on the prevention of sexual harassment in the workplace in Vodafone India.

“I grew up in a relatively patriarchal society and yet my family encouraged me to be educated and to support myself, which gave me a sense of self-worth and confidence,” she says. “I feel that people took a chance on me through my career, and I should do the same for others.”

Promoting people internally and increasing diversity have to go hand in hand with a structured approach to development opportunities. Sadarangani began with a competency-mapping project, which was part of an internal audit future strategy initiative, to identify the skills Vodafone’s internal auditors would need in the future. This provided insights into the professional and personal skills that she needed in her team, which she could share with staff and use as the basis of a conversation about their future development and career. “The human mind is the same the world over.” she says. “You’re dealing with human beings and if you are honest with people and work with energy and passion, you will gain their trust. You have to put out a smile and believe in yourself, and make other people believe in themselves.”

The policy of promoting people internally means that those entering the team from outside tend to be young professionals who need to be trained to understand Vodafone’s business and the skills required of professional auditors. “The scale of Vodafone can be overwhelming, so we tend to start internal auditors off in a smaller market so they can get to know the business and Vodafone, and then we stretch them further with a bigger market until they’re ready to lead and deliver an audit themselves,” she says. “I’m now a Vodafone coaching champion, so I also offer myself as a coach elsewhere in the organisation, usually to help managers who are on the brink of moving into senior leadership roles.”

Getting the best from these diverse humans, however, requires specific skills. “It’s complex – diversity is one thing, but inclusion is another,” Sadarangani admits. “I have a team from multiple countries, with many different backgrounds and ages. How can I ensure that all these people have a voice and can be heard and that they have a fair chance no matter what their status in the team or their experience?” One important element, she says, is to encourage people to challenge the obvious and never to be afraid of asking the “stupid” questions.

She used the Myers Briggs personality type indicator to help the whole audit team understand their personalities and preferred styles of working, communicating and decision making. “This was really helpful and became a fun way to collaborate, recognise diversity in the team and focus on inclusion,” she says. “We mapped the team and found we had a fantastically diverse range of personalities and styles, and this made us all more aware of how we express ourselves and whether we were presenting arguments in the best way for the people we were talking to. We can use this when we conduct audits, engage with stakeholders or write up reports.”

It has also made team members think more about how they communicate in conversations and in written reports. “We encourage ‘plain speak’ as opposed to ‘risk speak’,” Sadarangani says. “Not everyone understands how we get to ‘business impact’ or ‘likelihood’ in the audit findings, and therefore expressing this in a language that the business understands helps us to influence them to appreciate the risks and our overall audit opinion.”

In addition, Sadarangani draws on her move to London from India three years ago to inform her work as a “buddy” for others moving to the city from emerging markets. She aims to help them “transition to moving to, and living and working in, a new country – personally and professionally”.

Fit for the future

The work to map the team’s competencies emerged from part of a new strategy for internal audit that was introduced two years ago and focuses on the future of the function. “We asked how we can keep pace with the changes around us,” Sadarangani explains. “Words like ‘agile’ are bandied about, but they can be confusing and can mean lots of different things (or not much at all). So we started to build a competency profile – what skills do we need now as a minimum and what will we need in the future? Some were professional core competencies, such as audit methodology and report writing, and some were more complex, such as robotics, agile techniques, cyber security and artificial intelligence. The rest were a mix of  professional and soft skills, such as influencing, critical thinking, conflict management, etc.”

Each competency was put on a scale measured from one to four, with level one being the most basic and level four the most expert. Internal auditors assessed themselves against these competencies so managers could identify which skills needed further development within the function.

They gave each competency a target – for example, a certain number of people needed to be cyber experts (level 4), but everyone else in the team also needed to be brought up to a reasonable standard of cyber knowledge (level 2 or 3).

“It was important that we told everyone that this mapping was not part of their appraisal process, but was part of their personal development. We wanted them to be confident talking to their manager about their development plans and that this was all seen to be positive,” Sadarangani adds.

The competencies and development plans were linked to courses available on the Vodafone University e-platform, so the team could see where they could access training and work to improve their skills themselves. At the same time, managers identified opportunities for people to try out new skills or develop existing ones in a safe environment – for example, by asking them to present audit findings in a team meeting, attend external training or undertake a secondment within the business.

Making time for this development activity was a challenge, so every auditor’s calendar is blocked out on a Friday afternoon once a fortnight explicitly for them to undertake learning activities. To prevent people working late at night or at the weekend, Sadarangani encourages the team to speak openly about resource and time challenges, so that she can look to provide additional support or reassess the workload, if required. “Many of our people have a hungry attitude to work, but we all need to balance our work and our lives. You need to switch off at some point and enjoy your me-time,” she says.

Establishing a consistent language and mapping are also crucial elements of Sadarangani’s work on a project to improve the control environment and, in particular, the second line of defence at Vodafone. This was prompted by a request from the audit committee about other sources of information and assurance within the organisation, outside the internal audit team.

Using the IIA’s Practice Guide on “Reliance by internal audit on other assurance providers” and work by organisations such as Gartner as a starting point, Sadarangani and her team started to map the second line of defence. They built their own maturity model and rated each second line on a four-point scale from “informal” to “advanced” maturity. Their findings led to a larger programme to establish a Vodafone way of assurance with minimum standards for the second line, with consistent language and processes.

Sadarangani is leading this programme and is currently building a control library with a consistent language, methodology and assurance framework. “In the long term, this work will pay back, because once we have a robust second line of defence, then internal audit can step back from those areas and focus on emerging and evolving risks,” she points out.

Sadarangani has achieved a lot since deciding to move to the UK three years ago, but the next year looks just as busy. She’s keen to expand the audit team’s understanding of, and skills in, areas such as cyber, robotics and block chain, so that everyone is working with at least a minimum level of knowledge and knows enough to ask the right questions and understand the significance of the answers. She is still working on the project to enhance and standardise the assurance from the second line of defence teams and her team is also focusing on the risks that emerge during major transformation programmes in the wider business.

“We are involved on multiple levels, offering both assurance and advisory work on transformation risks,” she says. “With the business embarking on digital transformation, integration and similar programmes, we will be involved in providing assurance on the associated control environment”

When asked whether she’s now a Londoner for life, Sadarangani says she has two hashtags – #londonishomenow and #mumbaiisalwayshome – and feels split between the two. Having turned down her first opportunity to move to the UK because of family commitments and concerns about whether it was the best career move, she says “London has been very kind to me” and she now loves it here.

“I advise anyone embarking on their career to spend a period working overseas,” she says. “It’s taught me a lot about myself. I found I am more resilient than I expected, showed me that goodness in people is the same everywhere and gave me confidence to interact with diverse working styles.”

Winning the Audit & Risk Award was hugely gratifying, she adds. “On a personal level, I feel that my leadership style, achievements and choices I made have been recognised and, on the professional side, it’s a testimony to all the great leaders I have had the privilege to work for in the past and all the fantastic teams I have worked with so far. I see this award as one for the entire team. It is about our collective success and achievements that will help us to be a world-class team, and support the company‘s purpose of ‘connecting for a better future’.”

This article was first published in May 2020.