While the coronavirus pandemic continues to disrupt the corporate landscape in the present, new research and a major survey projects climate change as the rising risk of the future, steadily gaining prominence in The Chartered Institute of Internal Auditors’ annual Risk in Focus report. Risk in Focus 2022, published today, tracks the risks facing organisations year-on-year as ranked by more than 700 Chief Audit Executives (CAEs) representing a range of organisations including leading businesses, public sector organisations and NGOs from across Europe.

Climate change has been steadily rising up the agenda, climbing four positions in the rankings since 2021 and seeing a 41% increase in CAEs who view it as a top five risk, putting it in the top ten for the first time. But, 7 in 10 (69%) of CAEs still don’t consider climate change as a ‘top five’ risk to business, and just one in 10 (12%) internal audit teams have said they are prioritising spending significant time and effort preparing for the ‘existential risk’ of climate change. The Chartered IIA is alarmed by the gap between awareness and action taken on this rising risk and encourages organisations to act now to avoid disruption in the future.

The Chartered IIA advises CAEs to follow the lead of prominent organisations which are already incorporating climate change risk into their plans:

Mike Ashley, Chair of the Audit Committee at Barclays, said:

“Climate change is extremely high on the government’s agenda, particularly with COP26 coming up, and business has a critical part to play.  At a minimum, companies should record and publish their activities related to climate risk and sustainability, using internationally recognised standards such as TCFD, and internal auditors have an important role to play in providing assurance on these performance metrics and that they are embedded in how the business actually operates. Fundamentally, we need to ensure that high level sustainability announcements by businesses are actually lived up to, so I think there is work that internal audit can do in that space to ensure that we do walk the talk.”

“The rapid and radical adaptation seen across the corporate landscape during the pandemic demonstrates what businesses are capable of when needs must. Now is the time for similar innovation in response to the growing risk posed by climate change.

Businesses should prepare for climate change risks now to avoid large-scale disruption in the coming years, and internal auditors must play crucial planning and monitoring roles here. Those that fail to do so put their continued existence in jeopardy.”

The Chartered IIA recommends that organisations consider climate change a ‘forever risk’, and act to defend against this now by:

Other key findings from Risk in Focus 2022 include:

What are the top five risks that your organisation currently faces? 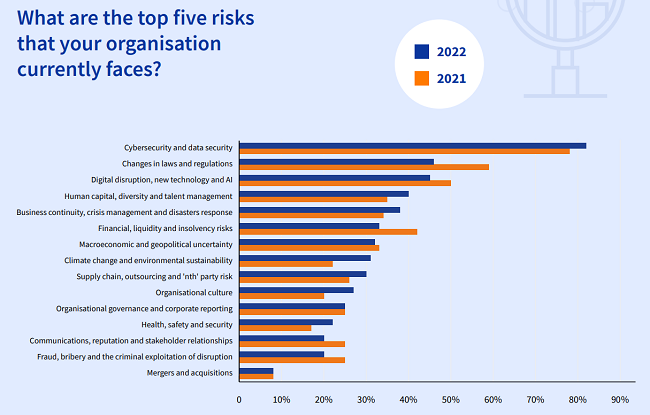